Posted on April 8, 2014 by indefenseofgettingoff

Before I had a menstrual cup, my period was a natural disaster, Old Testament style.

Genie: i woke up in a pool of period blood

Mark: well at least you know you’re not pregnant

Genie: this morning was like a noah’s ark morning, like let’s grab a male and female stuffed animal of each creed

Mark: and do what with them? sop up your bloody mess?

Genie: to save them

Genie: to save the world

Genie: unless they were like mosquito stuffed animals, then they would be set

Mark: how do lesbians keep from becoming extinct?

Genie: ha ha, lesbians don’t eat pussy when it’s bleeding, and they sync up their periods

Mark: but i guess pussies take longer to synch

Then I was saved.

Genie: i don’t know if i told you i got a cup

Genie: i’d say the main drawback is not being able to put stuff in me when it is in, i can get off with tampons in, but the cup fills my whole vag and if i stuck stuff in me, the cup would tip

yes, it is great

except for a few complaints:

Daria: see, I like the cup better for getting off because I don’t need something inside me and it’s not as dry

Genie: b) it is hard to fold to get in, but what is even harder is getting it out. the suction is fucking insane. and, while i agree with it being nice not to have to shove a dry wad of cotton up your twat, the wetness causes extreme slipperiness, which makes it impossible to get out.

Daria: hmm, I never had a problem getting it out

like, sometimes there’s a suction thing, but I can usually break it pretty easily

Genie: c) along the lines of the suction, the suction noises are crazy. if i was in a public bathroom and heard someone taking a cup out i would be like wtf are they doing in there!?!

Daria: haha I never had much noise

Genie: i can’t grip it to pull it out, it is too slippery! i have to dig my nails into it. and, like, i obv have no problem reaching in my vagina, but i feel like i have to reach so far in, like i am performing some sort of excavation. i try to push it out with my muscles, but once i touch it, even if the stem is already out of me, the slipperiness slips it back in

next time I remove it I’ll think about how I do it, but it’s just never been an issue

though when it’s really full, it’s sort of messy to get it out

Genie: in response to your thinking getting off is easier with it in, because you don’t need stuff inside you and it’s not as dry as tampons: i’ve never had a dryness problem with tampons as far as getting off, because the lower portion of the vagina has it’s own vag lub secretors (the bartholin’s glands) and i put tampons in farther than that

and actually I don’t remember perfectly, since it’s been a while since I used tampons

but if it’s it’s not enough, I can get more

Genie: so another thing that makes me prefer the cup to tampons is that most of the time i use a tampon, i have to chance it when i pee, because i end up peeing on it then it expands then it starts slipping out. i sometimes stick the string in me to avoid this, but often the pushing from the peeing pushes the tampon close enough to the vag opening, and thus the urethra, that i end up peeing on the lower portion anyway. the cup avoids this problem, because even if it slips out when you pee, you can just push it back it without dumping it or changing it.

Genie: so i have the moon cup (the new keeper), because i thought the diva cup was too embarrassing and the keeper is so traditional in a “our bodies, ourselves” sort of way

Genie: not something that looks like it is promoted in teen magazines

Genie: also the marketing is embarrasing. i’ve gone to their website.

can’t argue with that

Daria: yeah, the diva cup does have an embarrassing name

Daria: but at the time the keeper didn’t have a silicone one

Genie: the one thing that might be better about the diva cup is that it comes with a short stem, whereas with the mooncup you have to cut the stem yourself

Daria: anyway, I have it now, and I only need the one

Daria: I guess if I ever have a kid I’m supposed to then get the bigger size

Daria: unless I get rejuvenated!

Genie: unless you get a “va-junior”

or I can do those exercises

Mostly, I was pleased with my Moon Cup. It prevented me from having to worry about running out of tampons or tampon leakage, substantially cutting down my cognitive load. The logistics of my period were taken care of: I could run around all day without the cup overflowing and dump it out when I got home at night. You know how in the Girls episode “Vagina Panic,” Hannah asks histrionically, “What about the stuff that gets around the sides of condoms?” IRL, a slight residue of blood actually does get around the sides of the cup. It’s not leakage, though; it’s the blood already lining your vagina when you place the cup. Unless you diligently dry up your twat with a fucking wad of cotton, expect a few errant drops. Nothing black undies won’t obscure.

In middle and high school, I dedicated myself equally and sometimes simultaneously to homework and orifice exploration—using my fingers and any seamless, unbreakable objects(s!) I could fit inside myself. My uncle had told my older cousin that men masturbate with their hands, and women with around-the-house appliances. By the time I asked my mom if I could switch from pads to tampons, her suggestion that I might need lube to blaze the trail for a slim-fitting, junior-sized twat plug was farcical. Not that I cared to be a contrarian (cuntrarian?). It was the summer after 7th grade. We were stocking up on toiletries for sleep-away camp. Swimming was my stated excuse. Not that I had ever been fond of water.

You would think that with all my hard-earned, hands-on field experience—in combination with my lack of vagina squeamishness—by now I’d be an insertion pro. Sadly, not so!

Using the Moon Cup accentuated a long-standing shortcoming of mine: my midget vagina! Seriously, unaroused my vagina is so small, I could never fit a super absorbency tampon all the way in, without contorting my body and bending it. During heavy flow days, I had resigned to stuffing two regular absorbency ones side-by-side. Grower, not a shower. That’s me! No matter how much I trimmed the stem and sanded the edges, the Moon Cup always stuck out ever so slightly, irritating my vaginal opening. As I walked around, I could feel it rubbing—chaffing. When I extracted it to empty its contents, the lip caught on me: ouch! Chronically sore, I felt as if I had been fucked mercilessly without the pleasure. Maybe I shouldn’t have chuckled so hard in my head when my mom had insisted upon lube.

Surely, shopping around would produce the antidote to my menstrual cup blues, as it had to my tampon troubles (o.b. only!) Except, there was a scarcity of accessible information available. For whatever reason (regulation? Puritanism? lack of education + stigma + social hierarchy?), menstrual cups are relatively unpopular in the US. Viewed as a fringe item for an alternative lifestyle. It turns out that people in other countries are far less prissy about vaginas. For them, non-applicator tampons are the norm (as they damn well should be). I found myself checking out European and Japanese website and converting the metric system into our special units of measurement.

That brings us to differences between the LadyCup and the Moon Cup. I chose the LadyCup in particular because of some website (wish I could remember which one) that compared cups based on various dimensions (height of cup, length of stem, circumference of rim, fluid capacity, etc.) There might have been comparative photographs for visual reference. The LadyCup was guaranteed to be short, and that was the dimension most relevant to my needs. SIZE IS RELATIVE! I should note that a bunch of the cups come in various sizes. I purchased the LadyCup in size ‘small.’

The fact that it was offered in an array of VIBRANT colors was an added bonus. With functional products—especially ones that are to be shoved up a pitch black hole and bled on—I’m primarily practical in my preferences. Having a cup in spring green makes me smile, though. Feels like popping a Zoloft. Placebo effect.

Though it doesn’t come across in the photographs, the LadyCup is flimsy, whereas the Moon Cup is sturdy. The difference in pliability doesn’t necessarily confer an advantage for the Moon Cup. Let’s grant that the most important characteristic of a cup (or any menstrual product for that matter) is that it holds fluid without that fluid spilling. While it is intuitive to think of a rigid container as a good container, in reality flexibility is preferable: it increases the likelihood that the cup will continue to hold its contents in spite of the body’s natural movement. The LadyCup bends with you and rebounds to an optimal position. Stubbornly, the Moon Cup maintains its original shape regardless of how you are positioned. With the LadyCup I’ve had some issues with seepage; with the Moon Cup I’ve had a few instances where suction broke and there was a major spill. Moving on to the second most important characteristic, the LadyCup’s flexibility lends itself to insertion and removal; it folds far more easily than the Moon Cup. Because you don’t have to fight it to get it out, the crazy suction noises are eliminated (or maybe that’s because the break-the-suction holes are better placed?). Also aesthetically pleasing, blood doesn’t dye it.

Below I’ve included comparison photographs. They were taken after I had used the Moon Cup and before I began using the LadyCup. Since then, I have cut the LadyCup stem. It should be noted that the Moon Cup started out clear and became stained through use. The LadyCup is still a vibrant, spring green that makes me want to roll around in The Gap’s grass fragrance then go cardboard sliding down a hill. Wheee! As per menstrual ad protocol that requires one woman frolicking in field. 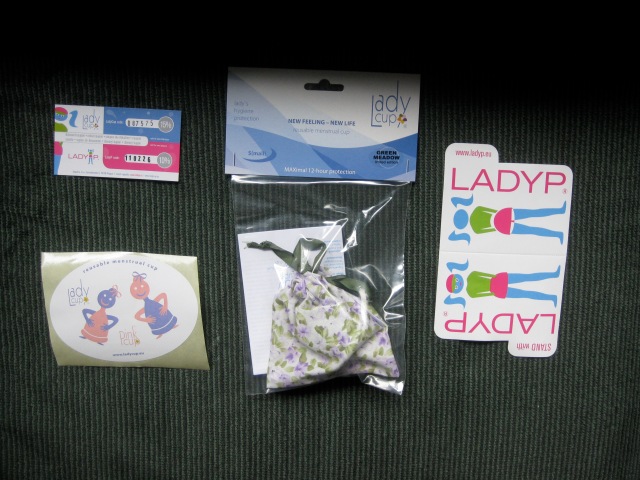 Wish I had the resources to compare more menstrual products. It does strike me as slightly offensive that I had to send away to the Czech Republic for a proper selection. We are that far behind in vagina innovation. I might as well live in “Are You There God? It’s Me, Margaret.” and wear a baby pink belt to discreetly hold a medical-grade pad in place. Something sooo retro (and unsanitary!) about filling landfills with disposable twat rags.

This entry was posted in short stories: period piece 2. Bookmark the permalink.