Posted on July 29, 2015 by indefenseofgettingoff

“That’s backwards of how the whole author thing works,” Andrew condescends, upon my suggesting I might read his book if we meet in-person and I don’t hate his guts. “If we meet and you hate me you can still hate-read my book,” he presses. And we move on from there, except a few weeks later he’s back at it, assigning reading as a tinder date entry-level prereq when he was the one who messaged me; I did not sign up for his private tutorial. “I just find it unattractively arrogant that you think I wanna read your book, or that I should read it, or whatever,” I attempt to deflate Andrew’s sense of entitlement. But he dismisses me with an adolescent “Meh. I don’t care,” as if he’s literally plugging up his ears and humming over me. “It’s like in college when the guy who didn’t do the reading still wants to be involved in the class discussion.” Incensed, I interject, “Wtf! Do I have to praise your work to talk to you? Are you gonna read stuff that’s important to me, or is that not relevant because I’m not a published author??” And I knock him down a notch: “I’m pretty sure I know people who have made much more significant contributions to society than a memoir about cocaine use.”

Andrew, arbiter of appropriateness, puts a yellow flag on our dispute, determining it has gone “off the rails.” The next day, allowed to speak, I reiterate: I will not subject myself to being quizzed on your life, an area in which you are indisputably an erudite scholar; I will not be a fan girl in a one-sided, worship-based relationship; I didn’t fucking consent to this rigged student-teacher social hierarchy. I allow him to apologize, if insincerely. When I ask what exactly he is apologizing for, he does a decent job paraphrasing my grievances. So I am willing to put it behind me, pretend to ignore my misgivings in the spirit of sex. Aren’t we all?

Shifting from foot to foot, waiting for our order at the pick-up window of the chili pepper red food truck, parked inside Habana Outpost’s outdoor enclosure, I spot him out of the corner of my jumpy eye, which is darting around for signs of the water, plasticware, untaken seats. Corn, is what he ordered, and a smile breaks across his sparsely freckled complexion, as I turn toward him with our dinner tray jutting out from beneath my overhang of tits. Andrew limps toward me, more gimp than gangsta, and I think he is juuust my make: long and lanky, slightly damaged, ladylike legs naturally spindly and now mismatched from a break sustained toppling over himself, subway steps deceptively slick after a nighttime scrub down. We sweep down under the canopy of a picnic table and face each other head-on for the first time, after over a month of unrealized suggestion—racy, fantastical, immaterial.

He reaches across the wood planks to hand me a sweater, as promised, attending to my complaint about the chilly summer breeze as he headed out the door to meet me. Soft and pleasantly unwashed, like bedsheets that have been slept in for weeks, comforting, his everyday pinpoint polka dot hoodie. I sniff it, covertly, as I flip it over my head and wrap it around my shivering shoulders, one swift motion is what I’m going for. With his offering comes a sailor hat and Hawaiian lei, party favors from the nautical-themed birthday party that he invited me to then silently uninvited me from just last night, on our joint birthday. Sensing the miffed expression creeping across my face, my lips thinning, he hands me more sweet nothings, dresses excuses as compliments, “I wouldn’t have been able to focus on the other guests if you were there.” I raise one corner of my mouth, unconvinced. “It’s best we met this way. So I wouldn’t be so distracted trying to get them to go home so I could be alone with you. The second I saw you in your floral dress… I was like ‘yes!’” I think back to five-minutes ago at the food truck, my eye catching the glimmer his. Our conversation has already elapsed a little stilted and awkward, not audacious and alluring like our previous correspondence. Better in print, I suppose.

Presenting as a peacock, he’s deliberately adorned himself in two items of flair—grey fitted vest over pink button-down, loudly patterned scarf he insists is an “ascot.” And I suppose that is the conversation piece, this a page ripped straight from Neil Strauss’ The Game, a pick-up manual for men without natural charisma. I’m starting to wonder whether he’s the real deal or carefully curated, a concoction. Feel as if I’ve pulled back the curtain on The Wizard of Oz, himself. Flamboyant image overcompensating for timidity, introspection, bookishness. Dorkiness, even. Quotations for every occasion or character flaw like a walking hallmark card or alibi—recited, rehearsed. Had I not invested a month in him already, I would have brushed off the situation as an intellectual connection with no physical chemistry. But I let him dilate time, lead me to the next location, extending bum leg all the way out, then rolling up on the front pad of his foot, with me following in tow. “Topple-over tits” is the phrase that comes to mind when I think of how he was walking. His demeanor, his disproportionate body. Underneath his puffed-up plumage is a sparrow teetering on teeny legs—mild-mannered, shy, sweet.

At the threshold of his brownstone, I take in our surroundings: his stroller-brigade Boerum Hill block does not resemble the pre-gentrification Fort Greene backdrop of the fantasies in which he casts himself as a legendary Downtown “scenester,” who nightlifed in Manhattan before it became a glorified B&T suburb. Creaking open his double door, he leads me into a collector’s cave of memorabilia. Not kitschy like David Cassidy or hardcore like Agnostic Front. But narcissistic like a shrine dedicated to his own microfame. His foyer greets me with a prominent magazine display, more mantelpiece painting than doctor’s office rack, only one item balancing on the moulding. Inquiring about the significance, he lifts it off the lip of the wall, flips it over, and there it is, on the back cover, a miniscule photograph of him, head poking out behind the important people. A hanger-on, he is, like Woody Allen’s Zelig, seeking to camouflage with celebrities, assume an identity of having “made it,” solidify fleeting acquaintances in photo ops, become part of any cultural zeitgeist that will have him, then relive it as a historian. All I can hope is that he’s a brilliant self-satirist, in on his own joke. This is a mockumentary, the soundstage walls set to come down. “This is Spinal Tap.”

On his bedside table, merch is spread out garishly—pins with his signature selfie. Meant for the days of jean jackets, backpacks. “May I have one?” I demure, estimating megalomania memorabilia to be the most hilarious sex souvenir this side of the East River. It’s sort of a test, how seriously does he take his craft. “No, I give those to people who have paid for my book.” My nose scrunches up at his denial. “Would it be weird if I showed up at one of your readings?” I ask. “Not at all, but I only do readings at indie bookstores,” he reminds me of his cred, emphatic, as if that were even the question I asked. Or maybe he’s reminding himself. “You should hand them out to girls you fuck and hope they bump into one another, knowingly. Like that Degrassi episode where Jay gives Emma gonorrhea of the mouth and brands her with the bracelet he gives all the girls. ‘Every Player Gets a Prize,’ it says.” “Ha! How ridiculous would that be?” Soo ridiculous. So ridiculous. That, shit, suddenly I covet a stupid trinket.

Before we met, I knew exactly how he wanted to be described. I had read it in a bad review of his book, a damning indictment if ever there were one. According to the reviewer, on his boundless quest for self-validation and cultural relevance—amidst his peers assuring him his work is brilliant and marveling at how a skinny literary nerd manages to land so many hot chicks—his biggest transgression is bragging about his girth. By way of another character, of course. Social proof! He had slipped it into one of our text message convos, as well, apropos of nothing—that he and his college girlfriend dated for three whole years even though he was “too thick” for her. Yeah right.

I didn’t mean to say it, exactly. I hadn’t rehearsed it in my bathroom mirror, or anything. And I wasn’t even sure we were having sex, penis-in-vagina style, until I hovered over him patiently waiting for consent, encouragement, enthusiasm, and he over-pronounced all the vowels, “Soo inappropriate for a first date. Preeemartial sax.” Yet, when the opportunity presents, somehow I can’t resist—testing to see if he will recognize my mimicry and implicit mockery. On my hands and knees, he pummeling me from behind, I peek over my shoulder and coo, “Mmm, you are really thick.” “Is it too much?” he hopes and dreams, his starry eyes sparkling in self-adulation. Nearly breaking character, I have to brace myself from collapsing into giggles. Struggling to one-up myself with a retort, I manage to deliver, “No… it’s purrrfect. I feel so tight around you.” My muscles clench around him and my timbre wavers.

Once he commences ignoring me, I decide that I no longer need to have any principles about him. So I purchase his book, send him the receipt, and mock him mercilessly, “I read your book. Twice. Now what do I have to do to get you to fuck me again? I would get down on my knees and suck you while reading your book aloud if it were physically possible.” Shockingly, he doesn’t bite my bait. Whatever, I’m not sure the degradation is worth the sex anyway, sweetheart this, honey that. Except the sex is reallly good. So who cares if he’s a profesh narcissist who uses dating as a platform for self-promo. My vag doesn’t know the diff. Anyway, I’m not sure if he’s more damaged than most or if he just flaunts his flaws. It’s the prob people have assessing me, I guess, so I feel a certain kinship.

A year later he reinserts himself into my frame. Bidding me a happy birthday. And I can’t help but reduce him to an object, a passing fad. Collect them all! 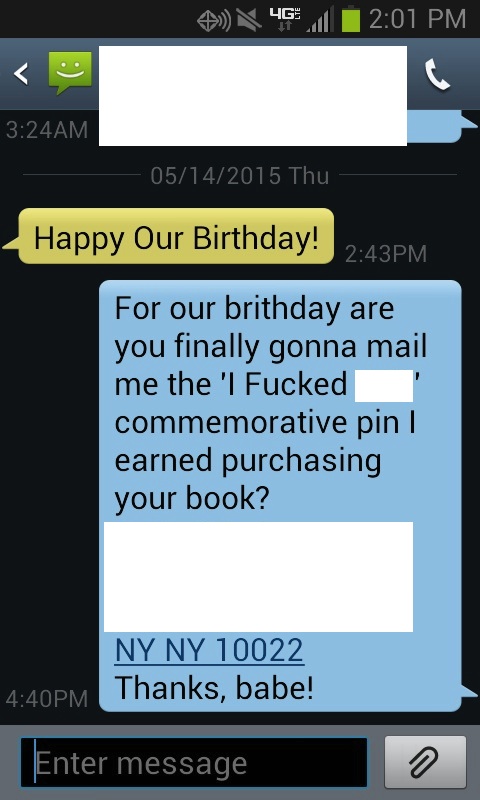 A week or so later he reemerges, and I check his social media to see to what I owe the pleasure. Apparently he broke up with his “girlfriend” and was looking for attention, to pick a fight, who knows. I put that word in quotes because it seemed superficial and tenuous, like he felt compelled to announce his relationship continually all over social media, told her publicly how pretty she was, literally tagged anything she commented on #girlfriend, as in “my #girlfriend is funny.” The most insecure in their standing are always the showiest. “Well thanks for thinking of me when you needed someone to lick your wounds,” I brushed him off. “But I’m not some fucking volunteer tending to lost souls. Just like I’m not a hospital volunteer. You already used me enough during your overwrought recovery for a broken leg and ignored me when I had cadaver placed in my spine. You know how it is.” And then I remembered I was a ghost, with unfinished business. “Oh… wait… one critical thing I forgot…” I pleaded before he slipped out of my grasp forever. “On our first date you asked to see a picture of my shit.”

So juvenile. So satisfying.

This entry was posted in keepsake. Bookmark the permalink.