Who Wants to Fuck a Small Town Girl?

Posted on May 23, 2013 by indefenseofgettingoff

When I told my de facto, grad school thesis advisor I wanted to go to med school, she questioned, “Are you suuuure? Do you know what getting no sleep is like? I dated a med student once, and we literally had to SCHEDULE sex.”

As my postbac summer came to a close, I planned for the week of vacation I had ahead of me. In advance. God forbid my spreadsheet contain sexual prospects who were already booked. (Ha ha, no guys, I don’t really use excel for sexual planning; only to analyze the monthly highs, lows, and averages of every city in which I might apply to med school).

First up was my old standby, Allister:

Me: I’m gonna be back in the city in two weeks. Wanna see Friends With Benefits with me?

Me: The eighteenth through thirtieth except for a two days in between. Also, wanna fuck the living shit outta me? I sure could use it. There exist zero available and eligible penises in [the wilderness]. Also, this guy in my class smells kinda like you. It’s way too much olfactory stimulation for the morning and makes me miss you.

Me: Boo. Wanna introduce me to someone when I’m home. Like have a who wants to fuck a smalltowngirl party?

Allister: Yeah, I could probably do that. You leave the 18th you said?

I ask because I’m having a little party the 19th after a show.

Me: Perfect. The 19th should be my first night back. So invite me and good times will be had by all. I’ve already planned my period around being home and my desired week of sexual decadence.

Allister: Wow. You are invited.

Ahhh, what a catch. Always knew I could rely on him.

Me: You still having a party tomorrow night? Or should I go to a dance party called Unicorn Meat? Sounds kinda sexy.

Allister: Still having a party! My show is at [venue] at midnight and so we’ll be back at my place shortly after 1

Me: Wow, late party. Is your show worth going to?

Allister: Yeah for sure. Could end up being the best one we’ve ever done.

Me: Ha, okay, well I might come. A little late for me, though. I’m on smalltown time.

Allister: Ok. No pressure either way.

Didn’t end up making it to the party because I had a wedding out of town the next day. Then stupid fucking Hurricane Irene, which was a joke in NYC. A joke, I tell you. And a bad one. The entire city was shut down for a little mist and some wind. Thanks, El Bloombito. Instead of a fuckfest, my week ended up being an Amelia Bedelia book. My cousin, who was scared to be alone, held me hostage in her fancy, UWS apartment for days and made me watch bad, reality TV. To prepare for the apocalypse, I went to EMS to purchase battery-powered headlamps (my wilderness trademark), flashlights, and lanterns, and she went to Whole Foods to purchase almond milk (less perishable than regular milk) and a rotisserie chicken. You know that Amelia Bedelia book where she, adorably, “dressed the chicken” in overalls? When it was time for our last supper, we couldn’t figure out how to cook the pre-cooked chicken. Would it explode if we put it whole in the microwave? We called a real adult for advice. Except in places where real adults lived, the phone lines were down. Once the chicken was cooked (okay, guys, so it turns out chickens don’t explode—the more you know!), we couldn’t figure out how to cut it. Did you know that chickens have bones!? How do I put this gently? The animals Noah brought on his ark were most likely not Jewish; they wouldn’t have survived otherwise. Our people are not too handy. Thanks, Amelia Bedelia for being my housekeeping role model. Not sure whether or how to tape up my windows during a hurricane, but I sure as hell know how to “draw the drapes.” 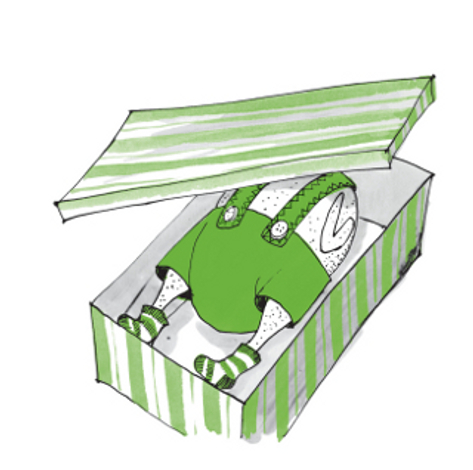 The next weekend, Allister and I made plans.

Me: Hey, survive the hurricane?

Allister: Hah. Yes, despite doing everything in my power not to.

Me: Yeah, what a disappointment. Today I felt like I was in a comedy routine. I went sex toy shopping and when they asked if I needed batteries I confessed that I was all stocked up from the hurricane. So what are you up to tonight?

Allister: No real plans, just working… I could step out for a minute… have a bottle of Scotch at home.

The wilderness is one of the few uncharted territories where it is harder for a woman to get laid. The very small minority of guys who went to my school were pubescent, art fags—would-be drama majors if hippies didn’t scoff at the concept of being bound by a “major.” Figured women were my only hope for getting fucked in the wild. Pretentious, fauxhemian, NYC cultural tourists who smoked cloves, were born with prescription drug problems, and attended synth-only parties. Think Sookie Sapperstein from Igby Goes Down, only adorned in floral, “vintage” dresses from the Salvo that someone’s grandma musta died in (paired with hiking boots—because wilderness!). Perhaps a touch more intolerable than Tisch film kids.

Who wouldn’t wanna relive college just a little bit—dip their toe in the water or their finger in the pussy, so to speak. “That’s what I love about these high school girls, man. I get older, they stay the same age.”-Dazed and Confused Every so often, my ancient friends and I would crash undergrad parties. At one such party, I peed in a toilet like a civilized person, someone walked in on me and declared he would pee in the shower instead, and when I exited he was peeing in the shower and another dude was peeing out the window. Let’s all take a second to admire their efficient use of space! Also, the sink was filled with vomit and had an anarchy sign made out of human hair next to it. It was definitely a “kids, get off my goddam lawn” moment. Except it was their metaphorical lawn. And water it, they did. 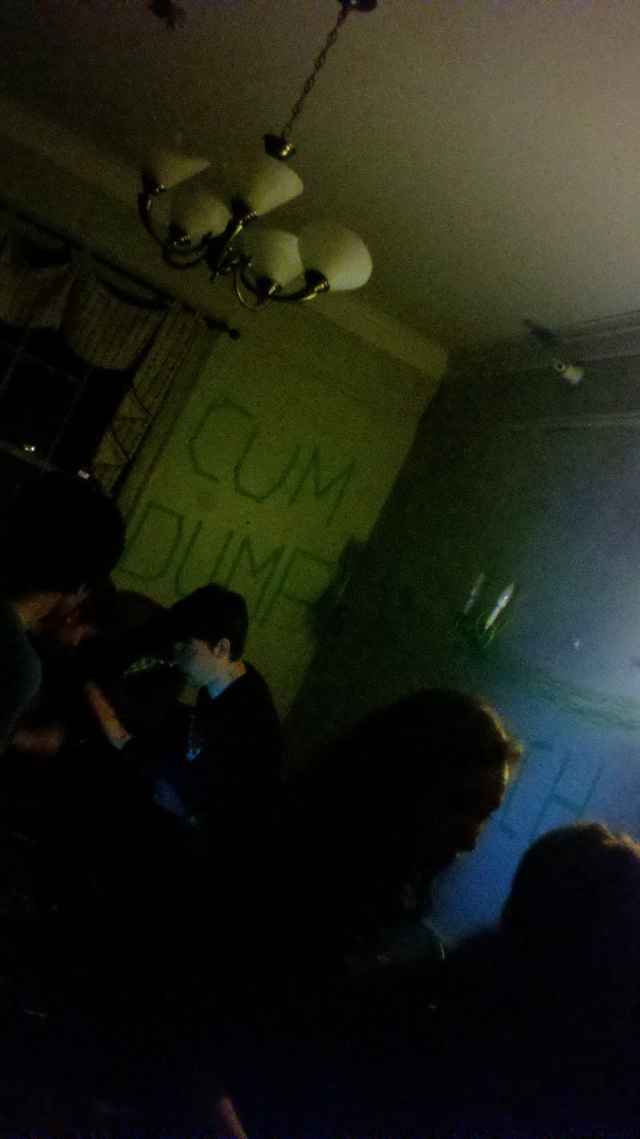 I had to make a choice between two builds and two fabrics: First, there are harnesses with a strap across each butt cheek, just like those used for rock climbing, and there are ones that are essentially bulky thongs. As much as I love me some butthole stimulation, having ass floss rub against you over and over seems like a chaffing nightmare. Second, there are harnesses made out of fabric and ones made out of leather. Fabric is machine washable, while leather makes you look like the kind of gay guy I am definitively not into.

Do not use on unexplained calf

When we met up, Allister and I had the following conversation, as we rode the elevator up to a snooty, rooftop hotel bar:

Me: So, I bought a strap-on today. You know what I don’t get about strap-ons? Harnesses come in fabric or leather, but either way they are black. Why would they only make them the most unfortunate color?

Allister: For the same reason scrubs are green. Blood shows up on them. Your partner knows if you haven’t cleaned up in between partners.

Me: Ew. It’s like bringing dark sheets to a blacklight party.

Upon being rejected from the bar, he turned to me and grinned, “Do you really think it is guest-only, or is that just for us?” We giggled the whole elevator ride down. Ended up at our old standby Black Door, which we affectionately (immaturely?) refer to as “Back Door.” When the night started winding down, he propositioned me, “Do you wanna go back to your place and smoke pot and fuck.” I looked at him puzzled and thought, oh shit. We were a few blocks from his place. What was the meaning of this? With furrowed brows, I gave him a counter offer, “I don’t have any pot. Do we have to smoke pot and fuck or can we just go back to my place and fuck?” And he was like, “Oh, in that case we should just go to my place. I only suggested your place because I assumed you had pot.” Phew. It was settled. Why I love him, is how direct he is with me.

For, like, months I got off to what I’d do if he were really seeing someone, like, seriously. And how he’d tell me that he’s sorry, he’s a “respectable man” now, we all knew this was where things were heading if he could “swing it;” and I’d slide my hands in my pants and be like, “You can just watch. It’s no worse than watching porn, right?” Except, as things progressed, I’d beg him to let me smell him and, like, bury my face in his crotch without really touching. I mean, could he really tell me I wasn’t allowed to get off in front of him? Would he be able to resist once I could smell him get musky and he knew that I knew that he was aroused? Wouldn’t want to risk it though, because we have such a good thing going. A girl can dream about fuck buddies forever, though. Sigh.

Used to not get off to him because his smell is what I need. When you have no sexual stimulation, you think about whatever is most salient. He’s the guy I’ve been with the most consistently over the years, besides, like, boyfriends. Even if I’m not so into picturing him, our dynamic is sexy to me. I like how he holds me down on a bed and watches me intently as I get off. If you get off to someone watching you get off, does that make you the biggest sexual narcissist ever? I’ll take it.

I don’t know if it was because I was so relieved he wasn’t for realz about being a respectable man, or because after my wilderness deprivation I was like an ugly girl, “So present, so grateful.” It was our best fuck ever. He came hard and I could feel every distinct contraction as I clawed my nails into his back. He slipped out and I came with my fingers shoved inside myself. For a second I was afraid the condom had broken because it was so visual: I could almost see it spurting out of him. The condom bulged like those squishy eye toys. For the record, he found a little pot. We smoked it as we were getting naked.

Omg, I just found the best page on the internetz.

Before we fucked, I commended him for being the “most reliable” guy I’ve ever been with. He clarified, “You mean I’m always down to fuck?” Mmmmhmm.